Shout out to Elizabeth Alexander, a senior majoring in Politics/Global Studies!

She has been chosen to present a chapter of her senior thesis at the International Studies Association Annual 2018 Convention in San Francisco!

In addition, she is involved in the IC Students for Justice in Palestine, the IC Unbound Dance Company, Phi Kappa Phi Honor Society, and the French Honor Society! Congrats to Elizabeth!

Shout out to Michele Hau, a senior majoring in Culture and Communications with a minor in Economics and Honors! She has been chosen to present a chapter of her senior thesis at the International Studies Association Annual 2018 Convention in San Francisco!

In addition, she has recently served on the Presidential Search Committee and has received the Emerson Humanities Collaboration Award!

Join the Ithaca China Care Club, in their goal to spread awareness regarding the medical necessities of orphans in China and raise funds for their treatments, as well as promote the home programs created in Vietnam for families who work in factories and cannot provide the care needed for their children.

There will be games like Heads Up, Apples to Apples, and Chopstick Challenges, etc. The entrance fee is $3 for one person and $5 for two people. There will be prizes: $25 Waffle Frolic Card, Mugs, Shirts, and more. There will also be free food!

Students, faculty, and staff are invited to attend the first event in the series of events in April aligning with the national movement: Sexual Assault Awareness Month.  The event will take place on Monday, April 2nd, 6-8pm, Emerson Suites Room C.

All events are offering students SLI credit for attendance. The first event in this series is the #EmbraceYourVoice kickoff event, hosted by the Sexual Violence Prevention Programming Committee. Two distinguished speakers will speak about sexual violence, and then participate in a panel discussion. A resource fair will be available before, during, and after the event, and light refreshments will be available.

Joel McHale is coming to Ithaca College on April 15th. Tickets have been selling fast but you can still get a seat if you act fast! You won’t want to miss out on the comedic routine of this year!

Come to the Students Activities Board (SAC) for some TLC with SGC on Friday, March 30th from 12-3PM! There will be free food and it is a great opportunity for you to meet your representative! (FYI: The SAC is located on the 3rd Floor of Campus Center) 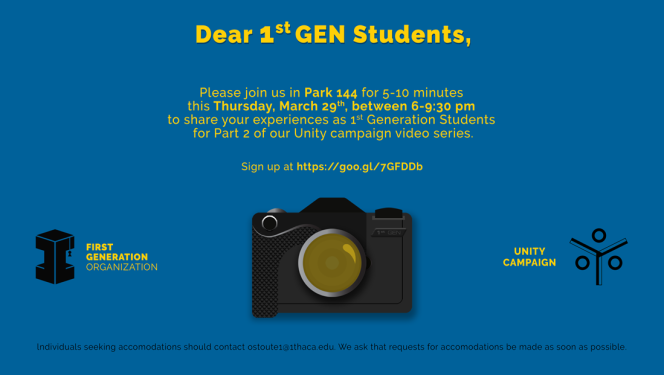 This Friday and Saturday night (March 30th and March 31st), Chabad of Ithaca College will be hosting a wonderful seder (dinner) to celebrate Passover!
Passover is the story of how the Jewish people miraculously escaped slavery in Ancient Egypt. This FREE event will take place in the Terrace Dining Hall both nights at 7:15 p.m on Friday and at 8:15pm on Saturday! A delicious meal, fun people, and a great time, something you won’t want to miss.

Talk Description:   A social movement must happen somewhere: spaces where new worlds could be imagined and places where activities could occur.

“In this talk, I explore how feminist newsletters and newspapers provided both places and spaces where the women’s liberation movement in the 1970s could exist – in the pages of periodicals and in the streets.

Not only did these publications convey where feminism was happening in a local community, they also offered glimpses of how women throughout the world were resisting gender-based injustices, enabling readers to see themselves as part of a larger imagined community of activists.  Moreover, the periodicals themselves were sites of feminism, materials in which the movement materialized.  In this sense, periodicals were crucial to the production, existence, and growth of feminism during this decade.”

Individuals with disabilities requiring accommodations should contact Carla Golden at golden@ithaca.edu or (607) 274-3504. We ask that requests for accommodations be made as soon as possible. 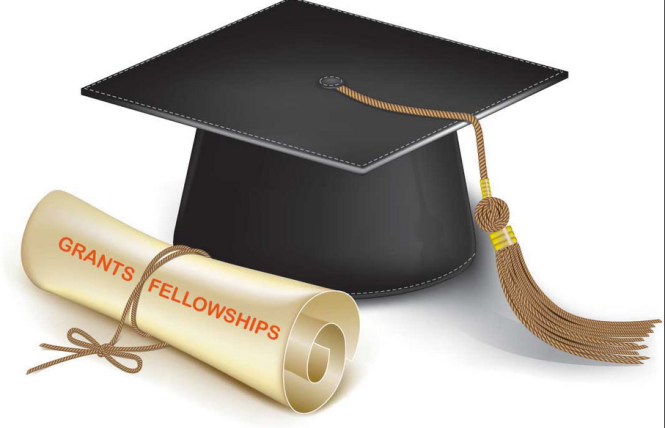 Today at 12:00 pm in Friends 307, The Honors Program invites you to an informational session about External Grants and Fellowships.

It’s never too early to start learning about how to get resources to support your biggest dreams and projects.  All are welcome, from first years to seniors.

There will be pizza too.

Hope to see you there!